My colleague was correct when he said that there wasn’t much new about the idea of enrollment management as a field. Using Google’s NGram tool, which charts the frequency of the appearance of words in literature across time, the phrase ‘enrollment management’ begins to appear in approximately 1975, yielding almost 40 years of material. Interestingly, the frequency trends dramatically upward around the year 1999, begging the question of what drivers might be attendant in that increase.

I was reminded of a frequent frustration I’ve had in reviewing the enrollment management literature, as my reading has not yielded much material on the impact of enrollment management strategy on graduate education. When I came across an article in College & University magazine on the role of Graduate Enrollment Management, I was delighted to see how the work is situated in the field. 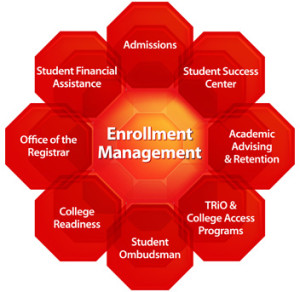 In the article, Crossing the GEM Frontier: Graduate Admissions Professionals’ Participation in Enrollment Management, authors Dean Campbell and Jahmaine Smith take on a very interesting topic: the development of professional identity in the field of Graduate Enrollment Management. The article begins with a brief “state of the field” section, wherein the authors describe the blurred line between enrollment management as a set of practices and as a philosophy or a mindset. They also describe enrollment management in a traditional sense as a set of practices that ties together student recruitment, admission, retention, career, and alumni functional groups. The central point of research inquiry questions the process of individual identity development as it relates to the integration of general tasks and responsibilities of the admissions function with the general processes of identity development.

The concept that had the greatest impact for me was the one around professional socialization. This is the idea that supports the general ‘community of practice’ idea that there are internally reinforcing processes that inform identity. There are many components of professional identity: institution, background, communities, professional associations, individual departments, inter-office collaboration, all in addition to the thoughts, beliefs, emotions, culture, and more traditional drivers associated with identity development. But the notion of professional socialization, that knowledge, beliefs, skills, and behaviors are specifically socialized by the different professional communities affiliated with the admissions professional.

The authors detail three components of identity in enrollment management (anticipatory, meaning development, and personal), discuss the details around the role of socializing of structural forces (i.e. institutions, departments, associations), and then the very role of having a field called enrollment management.

There’s some interesting descriptive work in their ‘Methods’ section, focusing on the way they attempted to ensure validity in the qualitative information solicited, the themes identified, and then the development of findings. Interestingly, there’s a great revelation around the source of the labor force in enrollment management being individuals who have worked in some way in the admissions field.

Additionally, there are some interesting discussions of the roles of traditional identity types in enrollment management, how they both reinforce and produce cultural norms and socializing forces. And the conclusion is really around how professional socialization can be used as an effective analytical lens for figuring out how the field works.

Overall, it’s a great article that I think I’ll be able to use in my work. Here are the big takeaways:

Stephen Taylor joined ASU in September of 2013 and is currently serving as Assistant Dean of Graduate Programs for the W.P. Carey School of Business. His professional experience is varied within higher education, with areas of focus in enrollment management, financial systems consulting, IT systems design and implementation, and business process analysis. Most recently, Stephen has held senior level management roles at a variety of institutions including Harvard Business School, Linn Benton Community College, and Thunderbird School of Global Management.

Stephen received undergraduate degrees in General Studies, Computer Science, and Philosophy; earned an MBA from Humboldt State University, and studied English Literature as a graduate student at Harvard University. He is a professional member of the Association for Computing Machinery (ACM) and a regular member of the American Philosophical Association.