I’ve always been intrigued when hearing about Carl Hayden High School’s robotics team. I know nothing definitive about them, and I feel like I haven’t heard about them for a few years, but if I’m remembering it correctly, this high school from the west side of Phoenix competed with and won national robotics competitions against colleges like MIT.

At the time, I could not understand how this small high school could compete with some of our nation’s most prestigious universities. Learning about communities of practice has made it clear how this happened. My assumption now is that a culture was fostered, started by strong leadership and kept going by team members who cared about the individual members of the team but cared also for the community as a whole and most likely fought hard to keep that culture going after they graduated.

I saw that too in my high school, Brophy, with one of our recent grads. A few years ago, a member of our robotics team set out to bring robotics down to the grammar school level. Our wonderful student Gabe started a team with our adjacent middle school Loyola Academy. Loyola Academy is a grades 6-8 school that only students who qualify for free tuition can attend. Brophy is an expensive school that many wealthy parents send their sons to, but we also have ample scholarship students who enrich our campus, attending Brophy for free because of scholarship donations. Loyola Academy, though very rigorous in curriculum, has none of the affluent-type students you’d find at Brophy – Loyola students predominantly come from south Phoenix and many live in Boys Hope, an organization that helps children without parents find a family structure. 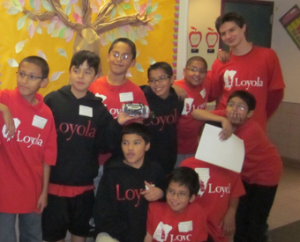 Well, our student Gabe started this robotics team at Loyola. Many of the members of the Brophy robotics team were perturbed because he left our team to do so. They were also disappointed because the middle schoolers began to beat the high schoolers in completions. And, by the way, Gabe has since gone on to the aforementioned MIT to study both medicine and robotics.

I will add that the Loyola team hasn’t been the same without came and this gets me back to our readings on communities of practice, especially the Jordan and McDaniel piece on robotics specifically, teams or communities need a strong group of peers to fall back and to strengthen the community when needed. Jordan and McDaniel (2014) wrote, “Learning to participate in engineering practices is one context in which uncertainty is particularly relevant. Engineering is an enterprise in which dealing with uncertainty is a central figure” (p. 4). This is why I see the role of a strong peer group so important to groups like these. I also see the importance of one transcendent peer who is able by personality or sheer force of will to keep the group together. Jordan and McDaniel studied how groups of your peers deal with uncertainty. I see my former student Gabe in this study. Jordan and McDaniel set out to study how peers deal with uncertainty in engineering and robotics. The authors detailed the disparate backgrounds of the students in this robotics group and went to discuss the group’s leader. Jordan and McDaniel (2014) wrote, “The teacher of this class, Ms. Billings, had more than 20 years of classroom experience and was recognized on her campus and across the district for her expertise in science and technology instruction” (p. 8). My assumption is that if you look behind the veil of the Carl Hayden High School robotics program, you’ll find a ‘Ms. Billings.” Certainly, in my story, Gabe served that role as well, and I believe that successful groups like these – robotics or any other from band groups or sports teams – will have someone to guide the community of practice through times and situations of uncertainty.