We have all seen movies where the police officer goes undercover to infiltrate the “fill in the blank bad guy group”.  The officer becomes a member of the group and begins to connect with members, sympathizing with the group, but eventually takes them down.  This troupe has been done over and over again and we think nothing of it.  Now you may be asking, “Where is he going with this?”  Some of the readings made me think this is part of our identity as a researcher.  Now we are not looking to take down a drug syndicate or anything, but we are looking to get into environments where research subjects are willing and comfortable to talk with us and share information.

Not unlike the officer going undercover, they were chosen for certain characteristics, personal qualities and the experiences they posses in order to join the group. Some researchers have the ability to gain access to different populations and have an easier time making meaningful connections, because they are a part of and/or understand the culture they are going into.

Dunbar (2008) discussed in the chapter of the significance of the “Lived Experiences” about the benefits of having a shared experience.  The idea that being a researcher that has a connection with the subjects allows for seeing or hearing what is, or conversely, not being said because one “knows where you’re coming from” (Dunbar 2008).  There are two ideas that I have come to understand through our readings, last week and this week.  One we need to take a personal inventory of ourselves, the experiences that we have had both through life, and in education, and being willing to disclose and acknowledge the good and the bad.  The other idea is that of knowing that our outward appearance and perceived status because of our education will open and close doors, depending on the groups we are researching.   By doing both of these I feel as if I will help myself gain a sense of credibility and convey a desire to help tell the story of those being researched.

In the Participatory Action Research and City Youth(Bautista & Morrell, 2013) article, I found the students ability to bounce between the different school districts in order to do the research as they had that lived experience and were accepted into the other cultures because they too were students. By being a cohort of members from each of the schools, traveling with the members of the other schools they could gain access, observe, interview and report.

Through the cohort they were able to assist each other in their research, establish credibility, work in the group to establish how the research would go, and how they would report it out, all with the support of their faculty to help guide them.  In doing their research it was interesting to see student’s perception of things being considered “adequate”, as compared to the same things being viewed as exceptional by others.  This idea really gave me that reality check, even though I am from a small town, with a single school, K-12 essentially in one building, I used to think it was just “ok” an nothing special.  However after moving here, and seeing schools here, I came to appreciate what I had in facilities, and in teachers. 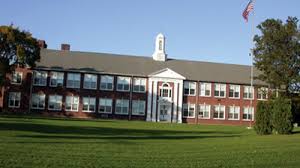 Yes. This is my actual high school (source, personal collection).

Ultimately we are not undercover agents, but we will be learning to negotiate our identities in order to meet a desired goal, and hopefully do some good.  The more we can help each other navigate cultures, and to learn more about ourselves, the better we will be as researchers.