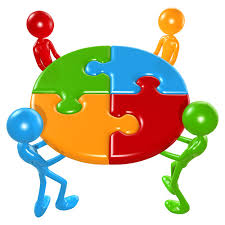 Learning is social; group work is social.  But, is group work learning?  Teachers think collaboration will enhance their students’ social skills, complex problem-solving skills, and content exploration.  Group work begins as early as first grade, because students will need to work in groups in upper grades.  In upper grades, students work in groups to prepare for college work.  In college, students need to train for “real life,” so group work is essential.  I question how much truly collaborative group work actually takes place in “real life.”

Everyone has been in a group where one person did all the work (as doctoral students, we were probably that student) as others sat back, relaxed and got a good grade.  A college chemistry student was put in a lab group, where collaboration meant assigning sections of the work to individual members.  Every week, as the deadline drew near, the others had not completed the work, so this student would do it.  The next day, a team member quasi-complained that she had done all the work, and he wanted to pull his weight on the team.  He gave her a Starbucks gift card for helping complete the assignment.  After that, he rarely did any work, knowing that if he waited long enough, she would do it.

Teachers want to avoid this scenario, and often tell students to report others in their group who are not fully participating.  However, we teachers need to learn better ways to facilitate groups and teach students how to collaborate.  Too often, the teacher assigns a group task and expects the group-learning to happen independent of any guidance or instruction.  Or, at best, the teacher assigns each student a role, such as discussion leader, secretary, summarizer, questioner, etc.  This gives the group some structure, but still doesn’t teach students the interpersonal skills necessary for real collaboration.

Into this fray comes new research from Jordan and McDaniel (2010) which, in my opinion, illuminates the need to teach students how to work in groups.  While working on science/engineering projects, groups of 5th grade teams interacted about problem-solving and negotiating uncertain territory.  The researchers closely watched and later dissected the recorded interactions between group members.  They found that group members could give supportive feedback to help solve uncertainties.  This feedback would then lead students to further discussion, brainstorming, and new ideas to try.  On the other hand, students who received unsupportive feedback, such as chastisement or being ignored, either continued with their original strategy, asked repeatedly about their point of uncertainty, or cognitively removed themselves from the task.  I think this clearly points to the need for teachers to instruct students and monitor the way they interact in small groups.  Students must learn and master these essential skills, as their implementation can distinguish between collaboration being a successful learning experience or a failure.

A warning to teachers comes in the example of Isabella, who is the only girl in a group of boys.  In her group, Isabella was largely ignored when she first tried to address uncertainties.  She persisted and forced the group to address her uncertainties, but was later described by the boys as “bossy” (Jordan & McDaniel, 2010, p. 27).  Another boy stated that her uncertainty, which was actually reasonable, was because “she just didn’t get it” (Jordan & McDaniel, 2010, p. 23).  Jordan and McDaniel note that “such negative interpretations of female students’ uncertainty are not uncommon for male classmates engaged in science learning” (Jordan & McDaniel, 2010, p. 27).  I have seen this same dynamic play out in a high school physics class, leading the girl to doubt her abilities and to make a career choice away from science and engineering.  Teachers need to be cognizant of this dynamic, and perhaps create single-sex groups in STEM classes or, at the very least, carefully monitor interactions in mixed-sex groups to make sure that this does not happen.

As a teacher in a university-preparation English language program for international students, I will be making practical use of this research.  Many international students have not had experience with working in teams, and it is something that I focus on in my classes.  This gives me a new way to address their work—both how to express uncertainties and how to address the uncertainties of others.  This is essential for these students, because they will surely have many uncertainties with a new language and new subject-area content.

Latest posts by Dianna (see all)